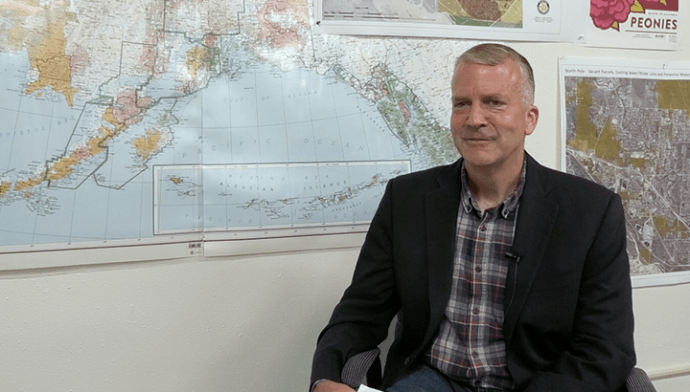 FAIRBANKS, Alaska (KTVF) When we sat down to interview Senator Dan Sullivan (R – Alaska) last Friday, the senator, despite running short on time, indulged us on all of the questions we had for him.

In this next segment, the senator discusses his outlook on the Alaskan economy, particularly in regards to energy production. He also addresses the calls for police reform sweeping the nation, and talks about moving forward in a post-COVID-19 world.

“The United States had once again regained its position as a world’s energy superpower,” he adds.

Sullivan says that his goal is to get out of the COVID-19 crisis with an energy sector that is “stronger.” He says this will be critical to post-COVID economic recovery for the nation.

“We have been addressing the challenges with the pandemic in the oil sector on a couple fronts,” Sullivan says. He refers first to the shock in global demand for oil which, in late April, resulted in negative oil barrel prices.

However, he also addresses the shock in supply due to a price war between Russia and Saudi Arabia, which is also believed to have contributed to the low price of oil.

“I wrote a letter, a very frank letter, to the [Saudi] Crown Prince,” Sullivan says. “And had numerous discussions with the Ambassador, the Saudi Energy Minister Abul-Aziz.”

In the letter, Sullivan says he touted his past support for the strategic relationship between Saudi and the U.S.

“It’s a 70 year old relationship that’s benefitted them pretty dramatically, but now they are taking actions,” the senator says. “And some reports that I was reading, they were purposefully taking actions to wipe out the American energy sector, and put tens of thousands of great working Alaskans, their fellow Americans, out of work.”

In response, Sullivan says that he warned Saudi Arabia that he was prepared to take actions which would “put [Saudi Arabia’s] security at risk.”

Sullivan said that in this spirit, he, along with Senator Kevin Cramer (R – North Dakota) introduced legislation to pull American troops from Saudi Arabia.

This, Sullivan says, along with negotiations with the U.S. Ambassador to Saudi Arabia, retired Army General John Abizaid, led the Saudis to drop their production by more than half.

As of Monday, the price of oil is just above $40 per barrel.

“Still not ideal for our state,” Sullivan says, regarding average barrel prices of $40. “But it’s a heck of a lot better than negative oil prices.”

Additionally, Sullivan says he is addressing the issue of major American banks who have pulled out of investing in Arctic oil exploration, including Wells Fargo, Goldman Sachs and JPMorgan Chase. European banks have also stepped back from investment.

On the subject of police reform, Sullivan began by condemning the actions of the officers who killed Minneapolis resident George Floyd, an African-American man. “The officers in charge should be prosecuted to the full extent of the law.”

Sullivan also praised the efforts of peaceful protestors bringing light to the issue around the nation.

He referred to an article written by former Secretary of State, Condoleezza Rice. “My former boss,” Sullivan says, “who knows a lot about these issues, being an African-American woman who grew up in Jim Crow South Alabama.”

Sullivan says that what he has gleaned from Rice’s article, and what he has been encouraging Americans to do, is to examine this issue as individuals. “What are you passionate about?” Sullivan asks, referring to points made by Rice’s article.

On police reform itself, Sullivan says that he is an original co-sponsor of the JUSTICE Act, which “provides long-term solutions focused on police reform, accountability and transparency, while also promoting efforts to find solutions to systemic issues affecting people of color such as education and health disparities,” according to a press release from Senator Tim Scott (R – South Carolina) who introduced the measure.

On COVID-19, Sullivan responded to criticism about the federal government’s initial response to the virus, saying that, “some of the criticism, initially on, was well placed. Particularly, for example, on testing.”

Since then, the senator says that testing has gotten better.

He also refers to the CARES Act, and particularly an $11 billion provision for what the senator refers to as “a Manhattan Project with regard to the vaccine.”

Sullivan says that he is seeing significant progress with regard to a vaccine. “The target would be by the end of the year, which is ambitious, but the experts that I’m talking to are saying at this point, that’s tentatively doable,” he says.

The senator calls this a “game changer”.

Sullivan adds that it is critical to balance the medical and the economic responses to the virus in order to preserve the economy while combating the virus.

Finally, the senator says he and his colleagues are looking at further legislation which will create more leniencies with regards to how CARES Act funds can be spent, an issue that several Alaska state legislators have complained about with regards to extreme restrictiveness, as well as problematic definitions for what constitutes as COVID-related relief.

“As I mentioned…tough times don’t last, tough people do. We will get through this stronger and more resilient,” the senator says. “But it’s no doubt a challenging time. All of us are going to have to continue to work together, and that’s what we’re trying to do.”

Read the article on KTVF here.