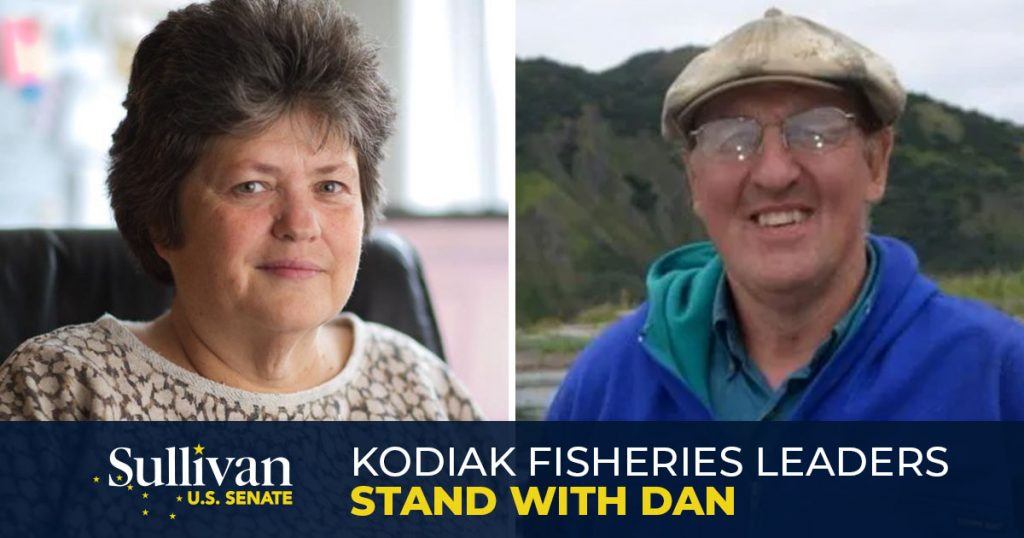 Alaska’s fishing industry encompasses fishermen, processors, processing workers, support businesses and communities. Seafood is the largest employer in our state, and the continued success of the industry is vital for Alaska’s future and maintaining our vibrant coastal communities

All Alaskans know that different fishery user groups seldom see eye to eye. We have often been diametrically opposed when it comes to regulating our constituency groups, whether it be before the North Pacific Fishery Management Council or the Alaska Board of Fisheries. However, we wholeheartedly agree on one thing: The Alaska fishing community needs Sen. Dan Sullivan in Washington, D.C., as our senator.

Many of the decisions that ensure success for Alaska’s fisheries are made in Washington, D.C. These include appropriations for fishery management, fish and crab abundance surveys, Coast Guard support, marine research and fishery infrastructure. Federal decisions also focus on fishery and processing regulations, marketing opportunities and marine policy. Sullivan has a six-year history of increasing funding for Alaska’s fisheries, pursuing meaningful regulatory change and working to maintain balanced fishery policies.

1. He obtained a permanent exclusion for Alaskan fishing vessels from incidental discharge regulations;
2. He influenced 2016 trade legislation to ensure that fisheries be “a principal negotiating objective” for all future trade agreements;
3. He negotiated $56 million for the 2016 pink salmon disaster relief, $10 million for the 2018 Chignik sockeye run failure and $25 million for the 2018 Gulf of Alaska Cod fishery collapse; Sullivan has been Alaska’s “Coast Guard champion”:
4. Sullivan has been Alaska’s “Coast Guard champion”: He has secured more than $400 million for Alaska Coast Guard infrastructure construction with an additional $700 million in appropriations for new vessels delivered to Alaska. Moreover, for the first time in more than 50 years, he helped obtain $650 million to construct a new heavy polar security (ice breaking) cutter;
5. He cosponsored and helped pass the Illegal, Unreported and Unregulated Fisheries Enforcement Act, thereby protecting Alaska’s fish in international waters;
6. He initiated conversations with Canada over transboundary mining concerns, which transitioned into bilateral talks to clean up the Tulsequah Chief mine site; and
7. He secured $65 million for NOAA’s Ocean Acidification research and mitigation program (think protecting our crab) and sponsored legislation to address harmful algal bloom and hypoxic events;
8. A very big deal for Alaska’s fisheries is the Magnuson-Stevens Marine Conservation Act (MSA) and modifications, if any, made through the reauthorization process. Sullivan drafted the Senate’s version of the reauthorized MSA after holding congressional hearings in Alaska;
9. He facilitated the appointment of the first Alaskan, Chris Oliver, to lead the National Marine Fisheries Service;
10. Most recently, Sullivan has tirelessly worked to include fishermen and crewmembers in COVID-19 relief by providing $50 million in direct fisheries payments, modifying regulatory language for fishermen to qualify for the Payroll Protection Program and clarifying that 1099 deckhands qualified for unemployment benefits.

This is all in addition to Sullivan urging the USDA to purchase Alaska seafood products for school lunch and government use (about $150 million in purchases since 2016) and to expand markets (about $7 million each year to the Alaska Seafood Marketing Institute). He personally secured $530 million of tariff relief money to US fishermen through the USDA Seafood Trade Relief Program.

Many in Alaska’s fishing industry have been disappointed in Sullivan’s reticence over the years to oppose the Pebble Mine. But he has recently made his stance crystal clear after a rigorous science-based process: “Let me be even more clear: I oppose Pebble Mine. No Pebble Mine”.

We all know that the best indicator of future action is past performance — not rhetoric in an election cycle. Six years ago, Sullivan promised that, if elected, he would support Alaska’s fishing industry. Clearly, Sullivan has delivered on that promise. We both strongly agree that Sullivan is the best choice for Alaska’s fisheries.

Julie Bonney, a Kodiak resident for 35 years, is the executive director and owner of Alaska Groundfish Data Bank representing the interests of Kodiak-based shoreside trawlers and processors.

Duncan Fields served on the North Pacific Fishery Management Council for nine years, fished salmon in Kodiak for the past 59 seasons and is a fisheries consultant for Kodiak Island small rural communities.