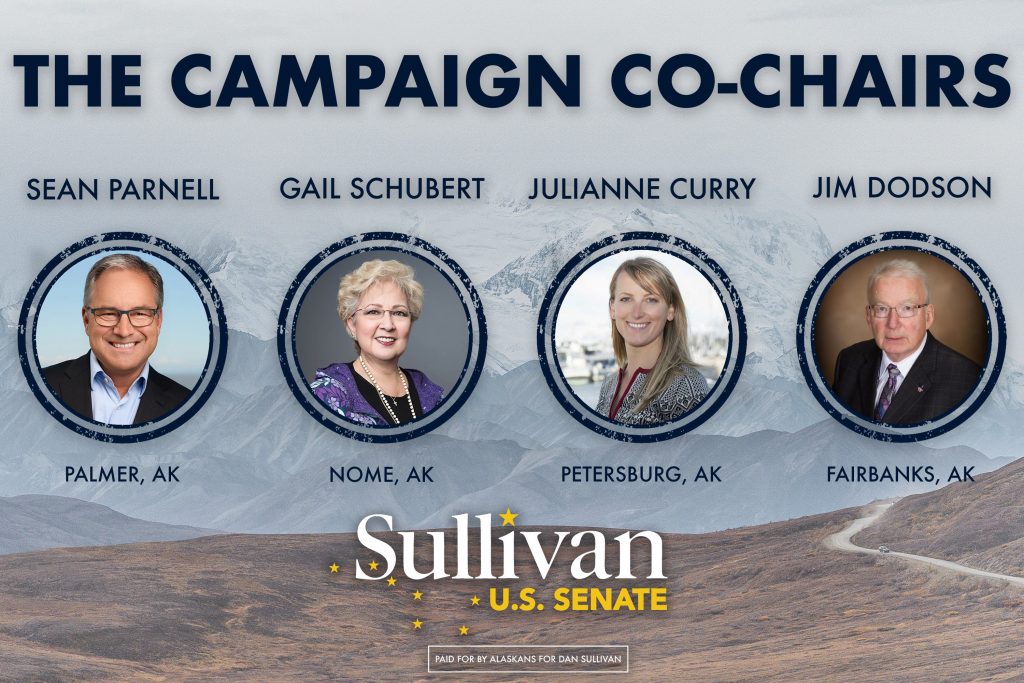 “It’s an honor to have the support of these accomplished Alaskan leaders; each of whom bring significant knowledge, experience and wisdom to our campaign team,” said Senator Dan Sullivan. “This is a co-chair team with a demonstrated track record for advancing Alaska’s best interests, and their leadership and thorough understanding of our state will be invaluable as we work together with Alaskans to build a stronger, more resilient state.”

The co-chairs represent a diverse group of Alaskan leaders, spanning political, geographic, cultural and professional backgrounds. Sullivan 2020 Campaign Co-Chairs will serve in key advisory and surrogate roles as the Sullivan campaign continues to expand and strengthen its grassroot networks across the state.

“I’m honored to join Dan, Julie and the entire campaign team in serving as co-chair of Senator Sullivan’s reelection campaign,” said Governor Sean Parnell. “One thing I appreciate most about Dan is his heart for the Alaskan people. As Attorney General, he spearheaded our efforts on Choose Respect and fighting domestic violence and sexual assault. As the Commissioner of Natural Resources, he was instrumental in creating new jobs in the Cook Inlet and North Slope resource investments. He continues to look out for Alaska jobs and workers at every turn. I also know Dan to be a person of honor and tenacity. He gets the job done and knows how to work across the aisle and stand up for Alaskans. Dan is the type of dogged leader Alaskans deserve in the U.S. Senate.”

“I have always known Dan Sullivan to be someone who tackles the issues head on, with the passion, drive and determination to advance Alaska’s interests in the U.S. Senate,” said Gail Schubert. “Dan is a true champion for rural Alaska and our Native communities, working hard to advance rural infrastructure like Arctic ports and harbors, expanding new clean water and sewer programs, and delivering for Alaska when it matters most. I’m honored to support Senator Sullivan’s reelection to the U.S. Senate, and am excited to further highlight the remarkable work Dan has done on behalf of all Alaskans.”

“Time and time again, Dan Sullivan has delivered for Alaska. Because of Dan’s tenacious work, we’ve seen over $1 billion in new military construction for Interior Alaska, we have great optimism for the future of Eielson AFB, and we have 54 F-35 Fighters set to arrive by the end of 2022,” said Jim Dodson. “He’s fought hard for our national security and refuses to let our military leaders forget Eielson Air Force Base and Interior Alaska’s strategic importance. On every issue we deal with, whether it’s our veterans, fisheries, resource development, Dan is the tip of the spear for Alaska. He’s a fierce advocate for our state, and I couldn’t be more honored to serve as a co-chair of his campaign.”

“When it comes to our fisheries and coastal communities, no one has fought harder than Senator Dan Sullivan,” said Julianne Curry. “He’s championed long-needed fixes to the EPA’s burdensome incidental vessel discharge requirements, is fighting back against tariffs on Alaska seafood, fought strongly to ensure our coastal communities received new Coast Guard cutters and assets, and has stood up to harmful transboundary mining operations. As a lifelong Alaskan and fourth generation fishermen, I know how deeply Dan cares about fisheries and the thousands of Alaskan men and women who work in the industry. Dan continues to be a strong voice for Alaska and has earned our support this November.”

Gail “Anagick” Schubert of Nome serves as the President and CEO of the Bering Straits Native Corporation (BSNC). Schubert also serves on the board of the Alaska Federation of Natives, Alaska Native Justice Center, ANCSA Regional Association, Commonwealth North, the Iditarod Trail Committee and the Native American Contractors Association.

Governor Sean Parnell of Palmer served as Alaska’s 10th Governor from 2009–2014. Previously, Parnell served as Lieutenant Governor of Alaska and is a former Alaska State Senator and Representative. Dan Sullivan served in the Parnell Administration as Attorney General (2009-2010) and Commissioner of Natural Resources (2010-2013). Parnell currently practices law at Holland and Hart’s Anchorage office.

Jim Dodson of Fairbanks has served as the President and CEO of the Fairbanks Economic Development Corporation since 2005. Dodson currently serves on the Civilian Advisory Board for the Alaska Military Commander, the State of Alaska Aviation Advisory Board, is a member of the Board of Directors of the Greater Fairbanks Chamber of Commerce, and is an alumni of the Chief of Staff of the Air Force’s Civilian Advisory Board. Dodson, a lifelong Fairbanksan, served in the US Army 5th Special Forces Group during Vietnam.

Julianne Curry of Petersburg is a fourth-generation Alaska fisherman and 14-year advocate for the Alaska seafood industry. Curry is the Chair of the Communications Committee at the Alaska Seafood Marketing Institute (ASMI) and is a member of its Salmon Committee. She has been a member of the North Pacific Fishery Management Council’s Advisory Panel, a former Executive Director and current board member of United Fishermen of Alaska (UFA), and is currently on the board of the Outdoor Heritage Foundation.